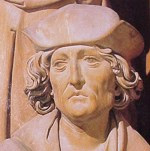 The world famous medieval master wood carver crafted numerous altars along the Romantic Road. Examples are found in St. Jakob’s church in Rothenburg – the coloured copy of this masterpiece „Holy Blood-Altar“ can be admired at our hotel – and St. Peter and Paul’s church in the nearby village of Detwang. The gigantic altar in the gothic Herrgottskirche (Lord’s Church) near the town of Creglingen is his greatest creation.

Riemenschneider lived in Würzburg for most of his life and served as its mayor for several years. He supported the peasants rebellion of 1525 and was imprisoned after their total defeat. He died in 1531 shortly after his release. Largely forgotten until 1822 when a worker unearthed his gravestone in the old cemetery of St. Kilian’s Cathedral in Würzburg. His masterful works are now properly credited.